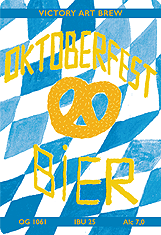 It's not a secret that the festival is already officially over but October is still going so why don't we have a mass or two of tasty beer? Of course, lagers is not our strongest skill, but we decided to take some risk and to spit nails a bit. First of all, it was decided to have the colour of this beer more close to the original beers of this style - it's much more darker than usual modern interpretations of the style as seen by Munich brewers. Second, we have dry hopped our beer! Of course we have selected the perfect aroma German variety - Hallertau Mittelfruh - which added to the brewing kettle during boiling as well as to the fermentation tank later for dry hopping. This hop gives a beautiful flower flavours to our beer. Finally, this beer is a bit more stronger that usual one in this style. We suppose that it would be a plus only for the late Russian autumn. We think that experiment could be considered as successful, the beer is very drinkable with nice malty body and German hops in aroma and taste.

Cook a grilled chicken, boil the fore hock, roast the Bavarian sausages and bake the golden Pretzel - these will be all the great match to our lager. Let's continue to celebrate the Oktoberfest!