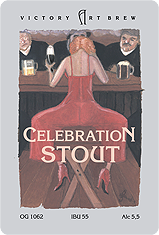 Celebration Stout is our first commercial beer. Once tasted magnificent English oatmeal stouts from Samuel Smith and Young's, our brewmaster decided to brew something similar. At his homebrew he created an original recipe which with slight corrections made the basis of our beer. Large amount of special malts, unmalted roasted barley and oatmeal flakes in combination with significant portion of aroma hops add deep and extraordinary saturation into this beer. Despite the relatively high gravity and creamy and viscous taste, this beer is very drinkable, leaving pleasant notes of bitter chocolate in aftertaste.

Celebration Stout was awarded with a golden medal at XVIII International Professional Conest "Beer of the Year 2013" organized by All-Russian Research Institute of Beer, Softdrinks and Wine Industry of Russian Academy of Agricultural Sciences and The Union of Russian Brewers at November 2013.

At the contest "Brewer’s Pride" as a part of the First All-Russian Conference of Independent Brewers and SoftDrink Producers "Independent Brewing, Cider- and Mead- Making of Russia" organized by National Union of Beer and Drink Producers at March 2014 our Celebration Stout took golden medal.

Did we reach the level of Samuel Smith? It's up to you, drink our stout!