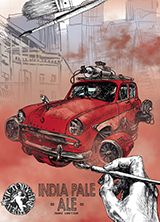 Our version and our vision of classic India Pale Ale in American style. Rather pale (with a small addition of crystal and wheat malts), very dry with distinctive bitterness and strong classical American aroma and flavour of citrus and tropical fruits - that's our interpretation of American IPA for everyday consumption. We used LOTS of hops to achieve that: 5 hops additions throughout the brewing process plus double dry hopping with significant amount of hops during different stages of fermentation. Hops composition should give pleasure to every hophead: Centennial, Columbus, Chinook и Amarillo - more than 15 kilos of that magical ingredient were used and added to boiler, mash tun and fermentation tank. Nevertheless, the beer is quite balanced.

This recipe was first homebrewed by our brewmaster and was the golden medal winner at "Brewer Day 2011" contest in a "Bitterness Unit" category. A bit later it was brewed together with our friends from St. Petersburg brewery Knightberg.

The Machine IPA became a golden medal winner in "Ale" category at the contest "Brewer's Pride" taking place as a part of the First All-Russian Conference of Beer, Cider- and Mead-Producers organized by National Union of Beer and Drink producers in March 2014.