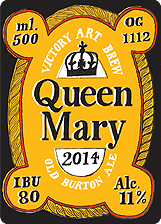 Please welcome our new beer Queen Mary brewed in a very special and almost forgotten style - Burton Ale! Just recently a daughter of our brewmaster has been born. Her name is Maria, so we decided to follow the English brewer's tradition to brew some special batch dedicated to the child birth. The part of this batch will be stored until her 18th birthday. We were carefully working on the recipe and stopped at Old Burton Ale - quite unusual strong pale ale. This beer was brewed in the Burton-on-Trent long before it became famous for it's India Pale Ales. This beer in the the same way as Imperial Stouts was very popular in Russia and Poland. And it's because of Russian taxes increase on pale beer import the Burton brewers decided to switch to another market - India. Burton Ale - strong and sweet beer. Historically the colour of the beer was pale-amber (in 19th century) to deep-nut-brown (in 20th). We took the recipe of 1843 as the basis for this beer and used pale malt only. Traditionally this beer was heavily hopped. We took Fuggles hops for bittering and East Kent Goldings for dry hopping. We used two strains of yeasts to ferment this beer including a special yeasts from Burton. And of course the water was well prepared to mimic the high in minerals water content of Burton. We have added a bit of gypsum and other salts. The result is a strong 11% ABV sweet pale ale with astonishing hoppy grassy and earthy aroma and hints of caramel in the nose, bright malty taste and solid bitterness in aftertaste. This beer needs to be consumed slowly and meditatively, taking every sip carefully with history recognition. This beer will perfectly sit on a festive table.

We are welcoming everyone to taste Queen Mary Old Burton Ale and touch the history!