While our stout is maturing in fermentation tanks, let's remember where did "oatmeal stout" substyle come from. Multiple sources claim that this modification of stout appeared at the end of 19th century in Great Britain. In particular, Martyn Cornell (Zythophile.wordpress.com) in his book about the history of English beer styles mentions that at least one brewery was producing stout with addition of the oats (unmalted or malted) in 1898. Ron Pattinson adds a number of recipes extracted by him from breweries' archives from the beginning of 20th century. No one knows exactly when this idea came to mind and who was the person but lots of people tend to think that most possible stimulus was the popularity of stout as a healing drink (we remember that they were prescribed to nursing mothers to enforce and stimulate lactation process). Oat was always considered as a healthy grain, so these healing characteristics were much exploited by stout makers and retailers. Moreover, addition of oat gave beer its unique silky and soft texture, making it sweeter than dry irish stouts but not so sweet as milk stouts with lactose addition. 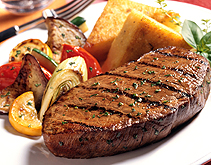 Let's now understand with the important question what is the best food match with our oatmeal stout. We have asked for advice the famous brewmaster of Brooklyn brewery Garrett Oliver, who has spent years studying and discovering the art of proper beer and food pairing. To be precise, we have opened his great book "Brewmaster's Table" which is the most complete work on the subject and this is that book which gave the impulse to revival of tradition to serve beer with delicious food. Many best restaurants of US and Europe are actively pushing and supporting this movement, presenting a wide range of beer styles in addition to the wine card on their menu. And "Beer Sommelier" is now a real profession.